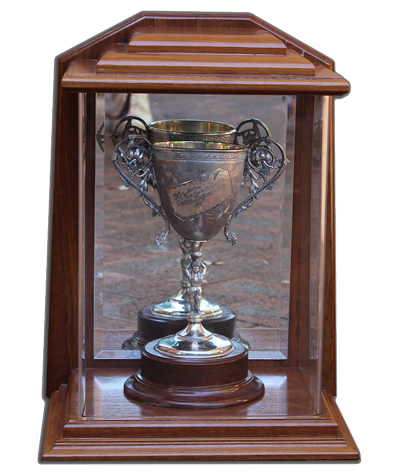 Inaugurated in 1885, the Dixson Cup is the oldest premiership cup in Australian Rules history.

The cup was created by and named after Sir Hugh Robert Dixson – the man responsible for Aussie rules becoming the first organised code in Western Australia.

Before the end of June 1885, Dixson promised to organise a premiership trophy for the competition and had the cup made in America to his specifications, to be kept by the first club to win it three times.

Rovers won the first premiership in 1885 and Fremantle the second in 1886.

Unions claimed the Cup outright after three consecutive premierships from 1887 to 1889.

Unions awarded the cup to the club’s premiership captain of 1889 – F.T (Paddy) Knox, who was the league's leading goalkicker in 1893.

Knox lived in East Fremantle and ran a local business for many years, becoming a life member of the WA Football Association, but the Cup's whereabouts from the time it was handed to Knox in 1889 to when East Fremantle man Milton Baxter bought it at auction in the 1960s remains unknown.

Milton Baxter became the owner of the Cup after spotting it in a shoebox at a Fremantle auction house.

“I went into Tom Newbold’s in Fremantle and saw the Cup in a shoebox with some other items that looked like they were from someone’s garage,” Mr Baxter said.

“I asked how much it was and he told me it would be auctioned so I put in a bid. I got a phone call a couple of weeks later to say I was the only bidder and to come and collect it. If I hadn’t bought it, he said it probably would have ended up at the tip.”

WAFL officials attempted to buy the Cup from Mr Baxter but could not agree on a price and a dispute ended in legal proceedings.

Mr Baxter had set the price at $10,000 and wouldn’t budge after the WAFL had its lawyers write him a series of letters threatening court action to reclaim the cup.

The premise of the court action was that the League believed the cup was still its property and that a club had, at some stage, probably failed to return it the year after winning it.

But historians found this to be untrue, and confirmed that the Cup was, in fact, awarded to the first club to win it three times – Unions in 1889, making Mr Baxter the rightful owner and the saviour of the Cup.

The Cup was eventually auctioned by Mr Baxter and purchased by WA sports store owner Jim Kidd for $20,000, after he made a winning bid for it at the West Coast Eagles’ annual banquet auction.

After spirited bidding, Mr Kidd secured the cup at twice the reserve price.

“I would have bid a lot more because I’ve never seen anything like it, I mean you can get autographs and those kinds of things — but this is a piece of history,” he said.

The trophy remained the property of Mr Kidd and was displayed at The West Australian Newspaper offices for the next 20 years.

Mr Kidd auctioned the Cup as part of a Bushire Relief charity fundraiser.

Speaking at the time, Mr Kidd said he would have loved to have kept the trophy in the family, passing it on from generation to generation, but when he saw the destruction caused by the deadly bushfires, he knew he had to give it up to help.

The two-week auctioned period commenced in February 2020, with the bid sitting at $20,000 on the morning of the final day. The WAFL Council of Presidents entered bidding at $21,000 and participated in the auction over the next 12 hours.

As bidding rushed past the $50,000 mark in the final minutes, some late telephone calls were quickly made, with agreement reached to place a final bid of $53,000 on behalf of WA football. This final attempt was sufficient to secure the Cup, seeing it returned to football after more than a century in private hands.

The Dixson Cup is now presented to the WAFL Premiers on Grand Final day alongside the traditional WAFL perpetual trophy and is an irreplaceable piece of West Australian football history.